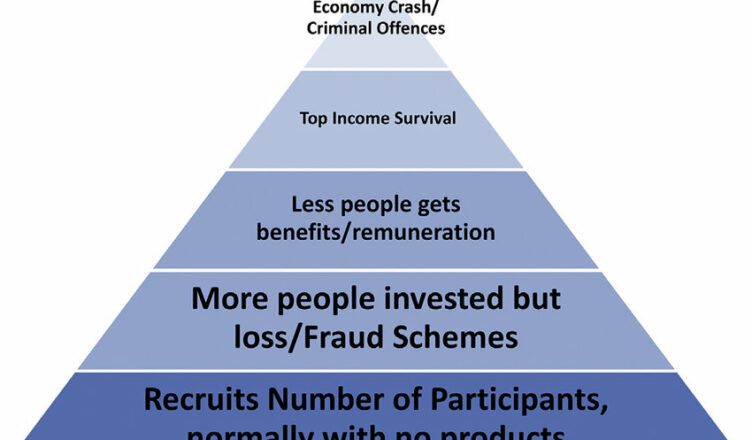 In contrast, the year beforehand when the pandemic first hit, a record-setting layoff began, with around 12 million workers being laid off. It’s almost as if getting let go from work has created a realization for the whole world, everybody has realized how much they hate their jobs.

And as a result, everyone is focusing on ways where they can earn income without having to commute, without having to waste away in traffic, without having to leave the house, which has led to the rise of remote jobs. In addition, more people are also going into business for themselves, creating monetization methods through blogs, youtube videos, it is all fantastic, it’s incredible to look at all of the new opportunities to open up in the world, and ways to make money as well!

However, there has always been a disgusting and dishonest pack of wolves that have always been looking to take advantage of unsuspecting people. People who don’t know anything about starting a business, perhaps these people have never even had a desire to start a business.

These people are everywhere, they are like homeless people begging for money on the streets, but instead of asking for direct cash, they try to offer/’entice you with something that they think may be worth your time. The actual truth is that their offers lead to your life becoming worse.

These offers can be in the form of some sort of nutritional product or some sort of business opportunity where you can make money. Usually, it is both. See my review articles on health and beauty-based MLM companies such as Plexus Worldwide, and Truvy.

You’ll be chilling out, and out of the blue, one of your old friends that you went to school with, or an old former co-worker, someone you haven’t talked to in years will start texting you, asking you to try out some “new opportunity”.

These conversations usually go a little something like this…

If you ever run into a conversation with one of these MLM “everything is a pyramid scheme” cult-possessed knuckleheads, run the other way. The training seminars provided by Multi-Level Marketing companies have this way of instilling this false bravado into their reps that makes them all think that they are some sort of God. That they are better than people that have a job. They try to rip apart your psyche by making you think that your job is worthless. Not at first, but once the conversation gets flowing, most reps will.

They make you feel terrible about your future. Most of us in the working class aren’t too excited about our job, and the doom and gloom are already there, we all think we are going to stay in the same factory until we’re in our 70’s, not a fun prospect to think about. These MLM reps make that small insecurity in your mind light up, and then try to convince you that you can change your life forever by using this business opportunity to make some life-changing income.

The truth about earning money in MLM’s:

This little snippet I got here, I took this snippet from a PDF document released by an article writer for the Federal Trade Commission. You can check out this document here, it is pretty much an entire book that gives you an overview of how MLM’s work.  Are you really going to doubt the source of the FTC?

The goal of distributers isn’t to direct sell you the sub-par products the MLM company is offering, its to sell you the dream of being rich. “lets network bro”

That’s where pyramid schemes come from, and all MLM’s in my opinion are secretly a pyramid scheme. That’s why most products MLMs offer is like just some off-brand version of something that’s a worse product than what you would get at your local grocery store. That’s also why all the health-based supplement MLM companies never have FDA-approved products, and also why the FDA is always handing out warnings and lawsuits against these kinds of companies.

Everything kind of just works against you in MLM. You gotta purchase whatever term they use, like a business package or some other kind of nonsense. This purchase is like $700, and also you have to pay around $40-$100 monthly to maintain your personal volume of useless products. Now these products, you either keep, or try to sell them at a higher price to other companies than what you bought them for.

It’s generally a treasure chest of products no one wants. 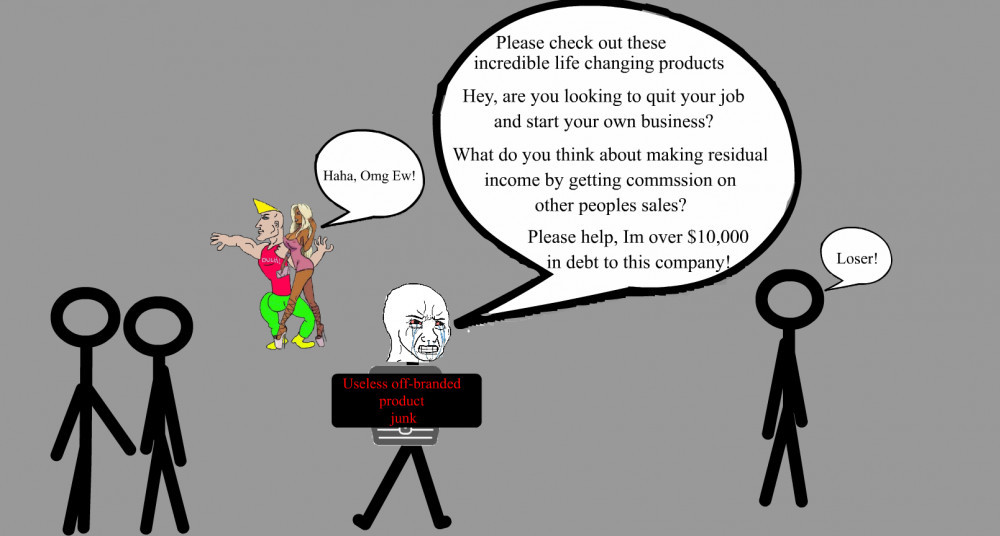 If you aren’t selling the products directly from a discount to full price standpoint(which hardly ever works), you are attempting to persuade your friends and family to buy a business pack(required start-up cost to form the business) and convince them to start a business. You’ll also be pretty much lying to them telling them how everyone makes six figures in the MLM structure. There is a difference between selling and lying, and giving false information about your chances of making money(it is proven statistically that 99% of all people in MLM’s fail) is a lie.

After a year, the wife was the sole provider income source for the family. Her job…was not so great at paying off the mortgage, which is when the foreclosures came. The kids who moved out, came back and moved in, and got full-time jobs, putting in 60 hour weeks, trying to make sure that their parents can survive, trying to make sure they don’t get evicted.

Meanwhile, the father believes that this Nerium is still the #1 opportunity of his life. He’s taking planes all over the world, attending conferences in Germany, Spain, to Las Vegas, and he at this point still isn’t getting paid, still not providing for the household, while the family is trying to negotiate with debt collectors and figure out which bill they can skip paying for the month.

One time, the father was gone for 4 months. He is traveling all over the world, getting into deeper roots with the Nerium network, allowing the cult to mark the father with their claws. His wife’s father dies, so he comes back to attend the funeral.

He tries to scam the family into trying/joining Nerium.

A fight breaks out, the son yells and screams at the top of his lungs at the father. The father just takes it, and a few minutes pass after the son yells at this old man, waiting for the situation to become calmer, the father then says he will cover his son’s business fee to become a brand ambassador.

Some time passes, and the father leaves once again to go God knows where. The marriage starts falling apart, the Mother gets a new job and starts preparing to live a life without the father involved. The father doesn’t show his face until the holidays come around.

The father takes the son out for lunch, and the son is happy to see his dad again. He gets the feeling his father has changed.

Until the father breaks into tears at the restaurant table that is. He starts begging his son to understand that he is on to something and that he will soon be bringing in huge amounts of money! He then gets bitter and starts ranting about how the wife doesn’t support his dreams which then turns into a pitch about how this MLM opportunity he is involved in can turn into free brand new cars, free vacations, and other absolute nonsense.

The father gets angry, the father raises his voice, the father starts to call his family lazy sleazebags who are afraid to leave their comfort zone. He called his son a loser, and he insulted him for going to college, he called college a scam and said that his company is the real deal.

The moral of this story is that Multi-Level Marketing companies take people who were once incredibly selfless people and turn them into soulless desperate scam artists.

Then one day, some stooge with some decent manipulation skills found a way to turn the father’s greed against him so that he could make some extra commissions for his downline. These commissions that probably weren’t that big, (maybe the guy made around an extra $300-500 off the father) caused the father to lose his family, and it transformed him from a human into a monster.

He tried to scam his family at his Grandfather-in-law’s funeral!

Lularoe was a clothing company that ran a pyramid scheme and caused many of its sellers to go into debt because they weren’t making any sales and had to keep buying products to maintain their business license.

In July 2017 Lularoe received two lawsuits, one from a woman who claims that the company encouraged her to sell breast milk to maintain her payments for the companies membership fee.

In 2019 Washington State Attorney General Rob Ferguson filed a lawsuit as well against Lularoe for not giving customers their refunds back, as well as creating false advertising based on unrealistic income expectations, and for Lularoe giving priority of promoting the business opportunity to its customers as a priority in advertising compared to promoting its actual products.

Jeunesse has been sued 4 times, and the most recent one is a class-action lawsuit from the California Federal court. The reason being is that Jeunesse is a pyramid scheme.

Monat is a shampoo/beauty-based MLM company. In February 2018 a lawsuit for 5 million was filed by Trisha Whitemire and Emily Yanes de Flores. The reasoning is that there are numerous cases of hair loss complaints by customers, there have been intimidation lawsuits by Monat to its distributors, and deception about its payment structures. Monat has also gone out of its way to delete criticism articles and videos based on their company.

Source: People complain against Monat for leaving them bald!

Other MLMs that have been sued:

Herbalife(one of the biggest class-action lawsuits in MLM history, the FTC mailed checks to 350,000 who lost money trying to run a Herbalife business)

And if an MLM isn’t getting class action lawsuits, it’s usually getting a slap on the wrist by the FDA for using unregulated supplements and selling them to customers. Companies that are often getting warnings from the FDA are companies like Truvy and Plexus Worldwide.

While we here at Safe Money Makers are still in our infancy stage, we have reviewed a plethora of MLMs so far, and we have not found one single MLM that we would rate beyond a 1/5. Most MLMs either offer unregulated supplements, some low-quality clothes, or no product at all and they just simply sell you a pipe dream.

If you want to join the great resignation and replace your job, there are a plethora of ways to do this, such as affiliate marketing, becoming a YouTuber, finding online work from home data entry/logistics jobs, but I assure you that MLM is not one of these ways. You will only find misery in MLMs.

All MLM reviews from Safe Money Makers (so far)

The Prosperity Of Life Network

Dubli Network Review: is it a scam or is it legit?

https://www.reddit.com/r/antiMLM/– Reddit community that has tons of guidance on watching out for MLMs. Many funny jokes and horror stories to go through as well!

https://isthisanmlm.com/ -Type a company name in and receive information on all source material on a company. This tool is managed by many anti-MLM volunteers. You type a company name in, if no results show up, you click add as an MLM, and then the moderators will research and provide context as to if the product is or is not an MLM.